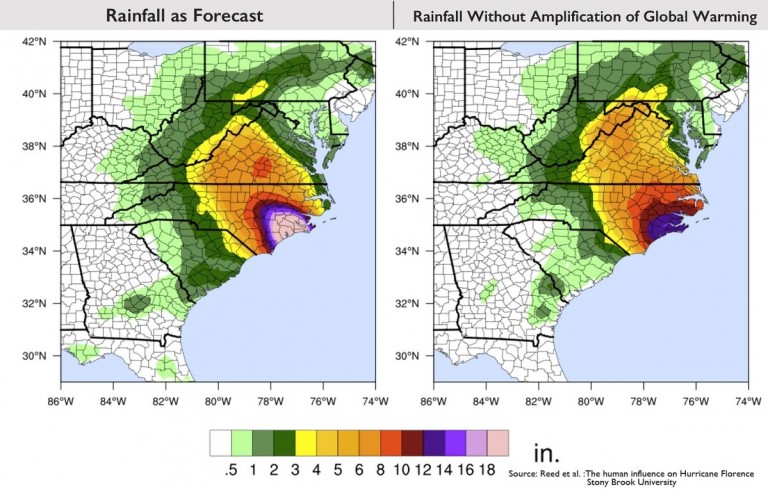 A landmark study has found that North Carolina is in for a larger, wetter, and more intense storm thanks to the effects of global warming.

The news: Hurricane Florence is forecast to hit North Carolina on Friday, and the US National Weather Service now predicts some areas will see more than 30 inches of rain. But even before the storm arrives, researchers at Stony Brook University have figured out how much we can blame man-made climate change for the devastation it is likely to bring. The answer is pretty dramatic: about 50 percent of the expected rainfall is down to human emissions, which also made the storm about 80 kilometers bigger and boosted its intensity.

How they did it: The idea is pretty simple: researchers run climate models using real-world climate conditions—in this case, air temperatures, moisture levels, and sea surface temperatures—and then re-run the models with the values that would have been seen had the climate not artificially warmed. Until now, though, this type of thing had only been tried after a weather event had played out (one showed, for  example, that Hurricane Harvey was made far more likely by climate change).

What it means: Climate scientists are getting ever more precise in their ability to tease out the influence of man-made climate change on individual weather events. Over the last few years, studies have shown how heat waves, blizzards, soaking rains and tropical cyclones have been amplified by the effects of our fossil-fuel-burning habits. Researchers have now taken the next step in showing how much of an impending storm’s wrath can be blamed on us.