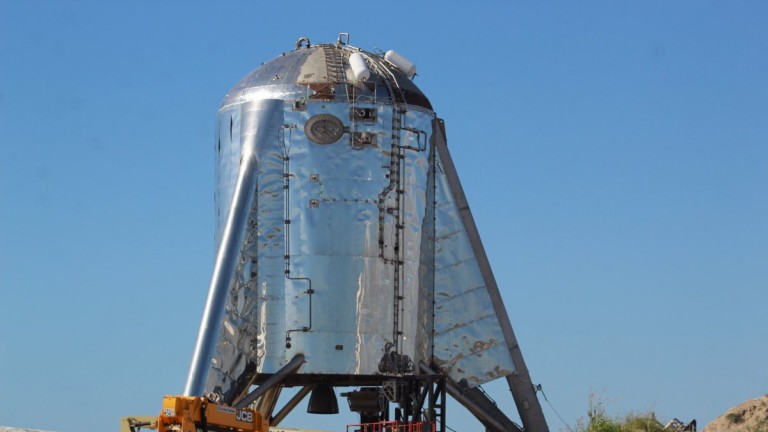 The flight only lasted about 15 seconds—but it’s the crucial first test for SpaceX’s new spaceship.

The news: Last night, SpaceX conducted the first flight test of Starhopper, the nickname for the prototype of its Starship rocket. At its launch base in Boca Chica, Texas, the spacecraft flew about 60 feet up into the air, moved sideways, then landed upright in a cloud of smoke. These sorts of tests are referred to as “hops,” hence the spacecraft's nickname. In all, the test took about 15 seconds. Musk tweeted that he expects tests of the vehicle to happen “20km up in a few months.”

What is Starhopper? A squat vehicle that looks a bit like a water tower encased in stainless steel and is powered by SpaceX’s Raptor engine. It’s a prototype of the first stage of SpaceX’s planned Big Falcon Rocket and will have a payload capacity about three times that of the Falcon Heavy. It will eventually have a nose cone to protect the rocket’s payload, but SpaceX decided to do without it for this early test.

Shoot for the stars: SpaceX CEO Elon Musk has big plans for Starhopper. The company plans to use the reusable vehicle to send people to Mars and the moon in the next decade.

A long way to go: The demonstration proved the vehicle’s basic launch and landing capabilities, but more such tests on Earth are needed before it ever gets into space. The first attempt to do the flight, on Wednesday, July 24, was aborted almost immediately, after the Raptor’s ignition caused a large fire near the launch site. Musk has said the system could perform the first crewed landing on the moon within the next four years, but it’s a highly ambitious time line given how much more work is still to be done.

Want to stay up to date with space tech news? Sign up for our newsletter, The Airlock.