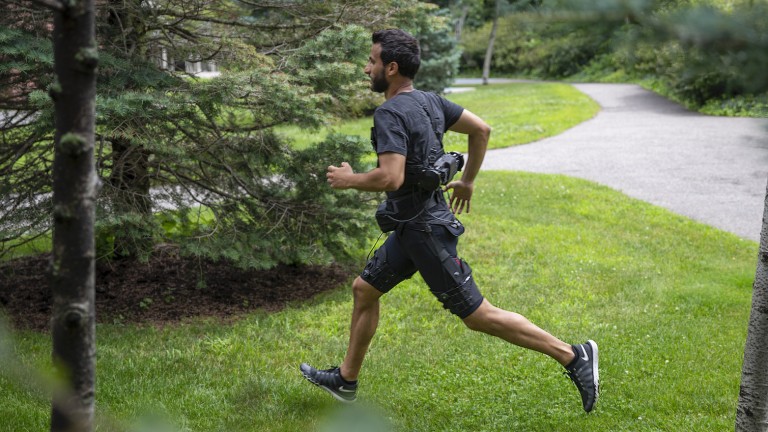 Forget the Thighmaster. Someday you might add a spring to your step when walking or running using a pair of mechanically powered shorts.

Step up: The lightweight exoskeleton-pants were developed by researchers at Harvard University and the University of Nebraska, Omaha. They are the first device to assist with both walking and running, using an algorithm that adapts to each gait.

Making strides: The super-shorts show how wearable exoskeleton technology might someday help us perform all sorts of tasks. Progress in materials, actuators, and machine learning has led to a new generation of lighter, more powerful, and more adaptive wearable systems. Bulkier and heavier commercial systems are already used to help people with disabilities and workers in some factories and warehouses.

In step: The new “exosuit” is made of soft materials that attach around the waist and thighs and an actuator that attaches to the lower back. Its function is controlled by an algorithm that detects the transition from walking to running, motions that are significantly different and require different actuation. Details of the system appear in the journal Science today.

Take a load off: The powered pants, which weigh 5 kilograms (11 pounds), reduce a person’s metabolic work rate 9.3% when walking and 4% when running (equivalent to removing 12 to 17 pounds from the waist). “While the metabolic reductions we found are modest, our study demonstrates that it is possible to have a portable wearable robot assist more than just a single activity,” says Conor Walsh, a Harvard professor who specializes in lightweight exoskeletons.