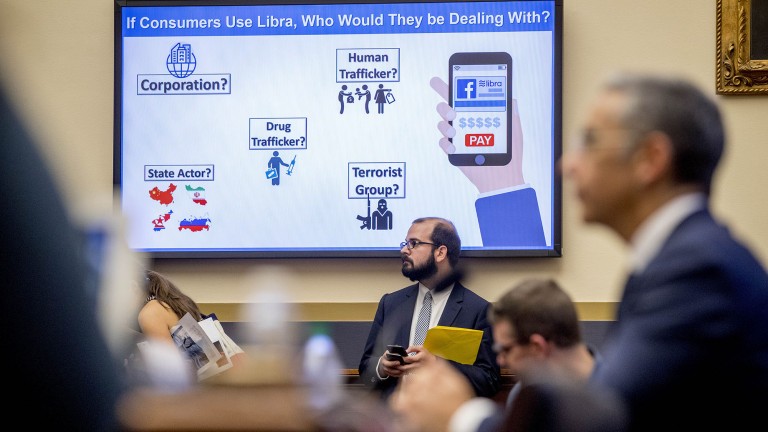 A flurry of new developments during the past few days related to Libra, Facebook’s proposed digital currency, has set the stage for the next round of political fighting over the project’s future. Just a few weeks after the company admitted to investors that increasing regulatory scrutiny could mean that Libra may never launch, the company now seems as determined as ever to get it off the ground—however long that takes.

Gearing up: Perhaps most importantly, Facebook has just hired a lobbying firm to focus on “issues related to blockchain policy.” The social network has spent $7.5 million on lobbying so far in 2019, after spending nearly $13 million last year. Now it has added Washington, DC-based FS Vector, a firm that focuses on regulatory compliance and business strategy. One of its partners, John Collins, was formerly the head of policy at Coinbase, the popular US exchange.

More details please: Facebook’s announcement two months ago that it planned to launch Libra was immediately met with skepticism from policymakers and central bankers around the world. They raised concerns about security, privacy, and the potential risk to financial stability. Critics have also lamented the lack of details regarding how the currency will be managed, sending Facebook back to the drawing board. Now the discussion seems ready for its next phase.

Continued resistance in Washington: Libra has taken fire from both sides of the aisle in DC, but one particularly vocal critic has been Maxine Waters, chair of the House Financial Services Committee. Late last week she met with Swiss government officials to discuss Libra, which Facebook has said will be managed by a Switzerland-based nonprofit called the Libra Association. After the sit-down, Waters said she still had concerns about “allowing a large tech company to create a privately controlled, alternative global currency.”

Internal resistance, too: According to a new report from the Financial Times, the increasing regulatory scrutiny has led some members of the Libra Association to grow wary as well. Three unnamed members have even been “privately discussing how to distance themselves from the venture” as pressure builds.

Part of the plan? Facebook has said that the back-and-forth with policymakers, regulators, and experts was what it was aiming for when it revealed its plans early. In that vein, today it also launched a bug bounty program that will pay security researchers up to $10,000 if they find critical bugs. “We know it will take a global community to launch a global cryptocurrency,” the Libra Association’s Michael Engle said in a blog post describing the program. “We are committed to taking the time to get this right.”