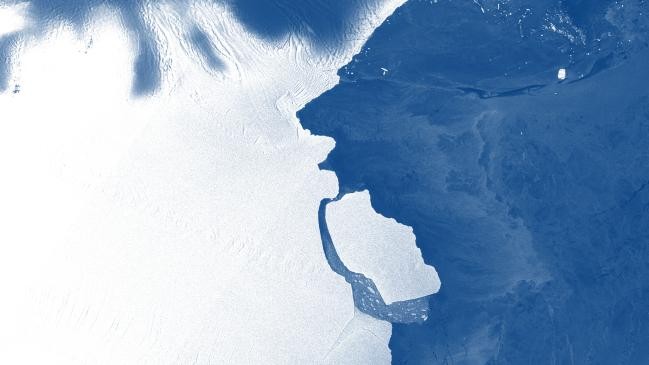 The 630-square-mile iceberg is the biggest to break away from the Antarctic’s Amery Ice Shelf since 1963.

The news: A huge iceberg has broken off from an ice shelf in the Antarctic. It was detected by the European Union's Sentinel-1 satellite system, which is continuing to track the iceberg, dubbed D28, because it could be seriously disruptive for shipping and resupply operations in the Prydz Bay area of the Antarctic. The process of breaking off, known as “calving,” took place last week but was revealed by researchers today.

Is it linked to climate change? For once, no. “It’s part of the ice shelf’s normal cycle, where we see major calving events every 60 to 70 years,” Helen Amanda Fricker, from the Scripps Institution of Oceanography, told The Australian. It is not expected to have any impact on sea levels.

What’s next: Satellites will be used to closely monitor where D28 goes, and how quickly. If sea ice forms around it, it could become a major problem, as it could block off shipping access to monitoring stations in the area. The satellite will also observe the Amery Ice Shelf, as there’s a possibility that a section of it, known as the “loose tooth,” could break off before too long.