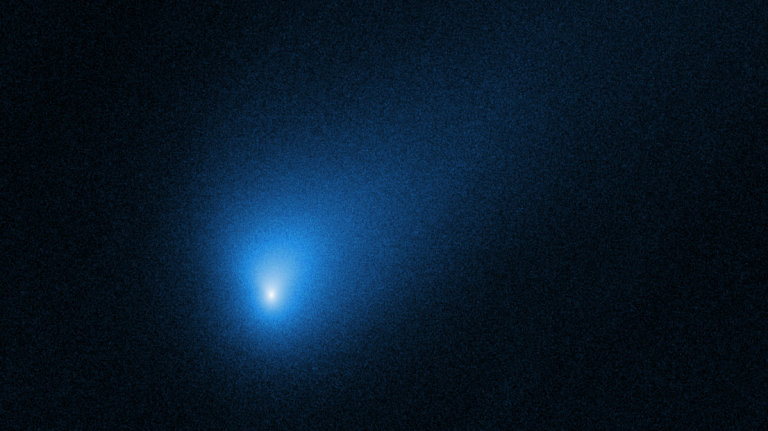 Astronomers have found evidence that 2I/Borisov, the interstellar comet discovered in late August, may contain water. If the findings hold true, it’s the first time we’ve detected water in our solar system that originated from somewhere else.

The detection: Using the Apache Point Observatory in New Mexico, a group of astronomers studied the light being reflected by Borisov earlier this month. Within the light spectra, the team found significant amounts of oxygen around the comet. Those observations aren’t water per se, but it’s very likely that the oxygen is derived from water molecules. The findings suggest the comet is losing about 42 pounds of water per second, over an area of a little over one square mile.

Wait, so why water? What’s probably happening is that the comet is being heated as it speeds toward the sun. Water ice on the surface is sublimating straight from a solid into a gas and being released as vapor, and then ultraviolet light is breaking apart water molecules into hydrogen and oxygen.

If it’s not a sign of water, the oxygen could instead be coming from other sources, like carbon dioxide.

So what? Truthfully, while it would be stunning to know Borisov is carrying water from another planetary system, most comets actually have water. The more astronomers study Borisov, the more it seems the comet is not all that unusual, (apart from being the first interstellar comet we've ever found and just the second interstellar visitor on record, of course). We’ve previously spotted signs of cyanide shaving off Borisov; that’s another common material in comets. Its size and shape are pretty run-of-the-mill, too.

Still, Borisov may have some surprises. It will fly past the sun in December, and as it gets closer, the heat will cause it to expel even more gas and dust, allowing scientists to learn even more about its secrets.