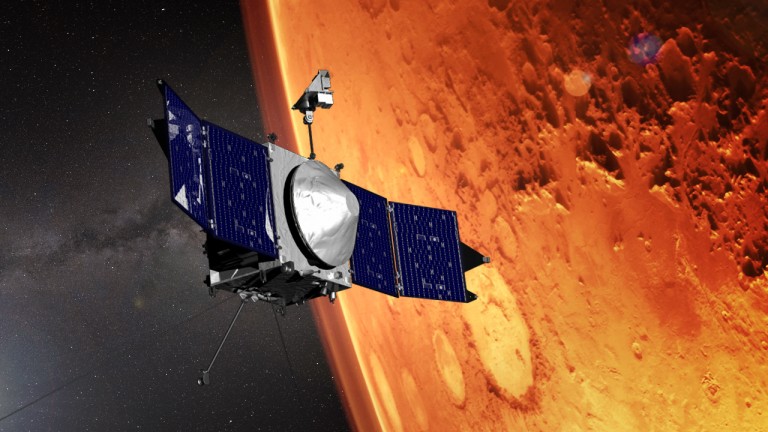 Scientists have mapped out Mars’s upper atmosphere wind patterns for the first time. The findings, published Thursday in Science, reinforce our understanding of the Martian climate as equal parts stable and unpredictable.

How did it happen? The investigation uses data collected by NASA’s Mars Atmosphere and Volatile Evolution (MAVEN) mission, which has been orbiting Mars since 2013. MAVEN has helped teach us how Mars lost its thick atmosphere billions of years ago, but it was never designed to investigate winds.

Instead, the team behind the new study had a clever idea: have MAVEN rapidly swing its normally stationary Natural Gas and Ion Mass Spectrometer (NGIMS) back and forth like a windshield wiper. This swinging effect meant that NGIMS, usually used to study atmospheric chemistry, was able to offset the orbiter’s own movements and measure the winds as if it were standing still.

What did they find? Overall circulation patterns in Mars’s upper atmosphere proved predictably stable season-to-season. But the team also found extreme variability within local pockets of the atmosphere, and so far there’s no good explanation for what’s causing this.

Another surprise was that winds as high as 170 miles in the air (MAVEN’s orbit is 106 miles above Mars) were still affected by mountains, canyons, and basins on the ground. Rising terrain can rapidly lift air masses up, causing them to ripple upward into higher altitudes. This happens on Earth, but not nearly as high as on Mars. It could be due to the thinner atmosphere, or because of how much bigger Martian mountains are. These findings in particular suggest Earth's upper atmosphere could have evolved into something much more chaotic had the surface formed more extreme peaks and valleys.