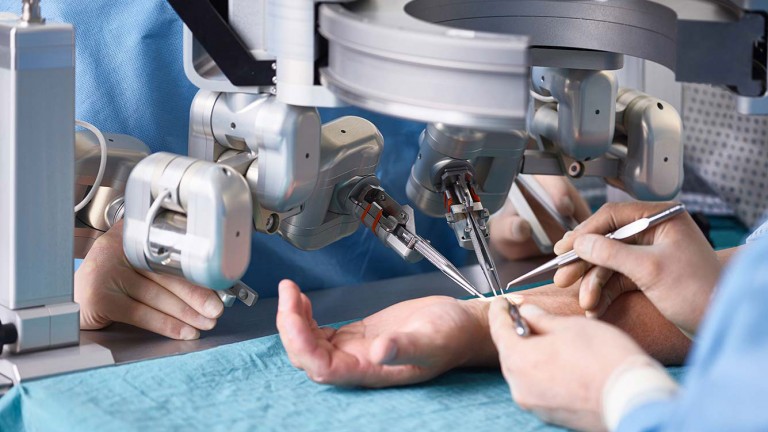 A trial of a new high-precision surgical robot used to operate on women with breast cancer found the system is safe.

Super-small: It’s the first human trial of a robot for “supermicrosurgery,” a term referring to surgery on vessels that range from 0.3 to 0.8 millimeters. It’s a form of surgery that only a small number of surgeons worldwide can perform.

The trial: Researchers from Maastricht University assembled a group of 20 women with lymphedema, a condition related to breast cancer in which excess fluid collects in tissues, causing swelling. They were all scheduled to receive surgery to relieve their symptoms by connecting lymph vessels to nearby veins, thus bypassing the affected area. They were split into two groups: one to receive solely manual surgery, the other to be operated on by surgeons using a robotic system called MUSA, manufactured by a Dutch company called Microsure.

How the robot works: The system is activated by foot pedals, and a surgeon controls the high-precision surgical instruments using forceps-like joysticks, mounted to the operating table. This setup basically cancels out small tremors in the surgeons’ hands and scales down their hand movements into more refined and subtle versions. For example, if the surgeon moves one of the joysticks by one centimeter, the robot arm moves a tenth of a millimeter.

Results: The group under robotic surgery healed slightly more quickly when researchers checked back on them, but beyond that there were few differences between the two. However, the point of the trial was to prove that the robotic system is safe and feasible, rather than to demonstrate superiority.

Why it matters: Robot surgery is nothing new. The Da Vinci system, the best-selling surgery robot on the market, was approved by the FDA two decades ago. It can operate with a degree of precision down to 1 millimeter, but it has not been found to be any better than traditional surgery, and with its $2 million price tag—plus maintenance fees—it is more expensive. Very high-precision surgery is a niche where robotic gadgets could potentially prove their worth, essentially by turning decent surgeons into world-class ones. However, they’ll need to be tested by many more surgeons on a lot more patients for us to be sure.