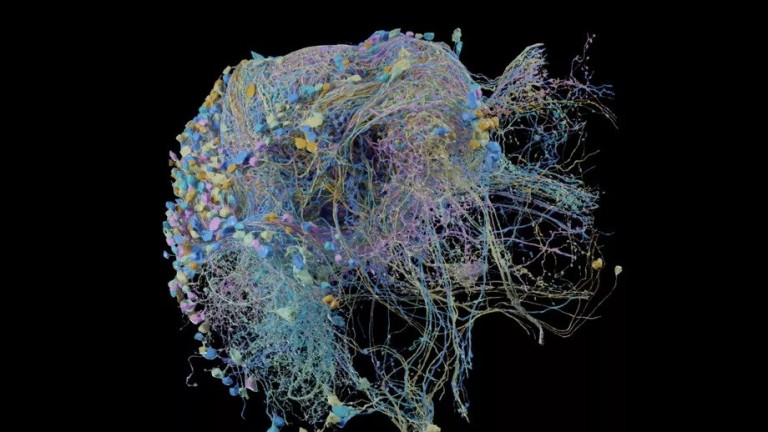 The news: Researchers from Google and Janelia Research Campus in Virginia have unveiled the biggest high-resolution map of brain connectivity yet, known as a connectome. It shows a diagram of a fruit fly’s brain, containing 25,000 neurons and the 20 million connections between them. More images can be viewed here.

What does it show? The map shows a region of the fly’s brain that is about 250 micrometers across, equivalent to the thickness of two strands of hair. The mapped area accounts for about a third of the fly’s total brain, and it contains regions associated with memory and navigation. A pre-print paper describing the research is available on bioRxiv, and the team has made the data available for anyone to view and download.

How it was made: Once the fruit fly brain had been sliced into very thin sections, the slices were scanned using an electron microscope. That produced 50 trillion 3D pixels, which were processed using an algorithm to trace each cell’s pathways. Despite Google’s computing muscle, the project still required a lot of manual labor to proofread the data.

The context: It’s a landmark for neuroscientists, who would love to be able to connect areas of the brain to specific behaviors. Before now, the only animal to have its brain fully mapped was the C. elegans roundworm, which only has about 302 neurons. The publication of a draft of the worm's connectome in 1986 has led to some useful insights into how certain neurons relate to behaviors, such as how they respond to temperature. But not all neuroscientists are convinced that brain mapping in this way (connectomics, as it's known) is the best use of resources. For one thing, a connectome cannot show how an animal's neurons fire in real time.

What about humans? We’re still a very long way from creating a complete connectome of the human brain. Fruit flies’ brains contain nearly 100,000 neurons. Human brains have about 86 billion.